On Apr. 21st, the Google Search algorithm is changing again.  Have you heard about their Penguin or Panda updates of the past? This update promises to be bigger. Google search plans to completely de-index websites that are not mobile-friendly. You can read more about it here. Mobilegeddon? I like it.

Just a note to those of you that have sites built and managed by Social Energizer. I wanted you to know, that in the past few weeks, I have personally checked all the sites that I am responsible for. I have found them all to pass the mobile-friendly test using your Google Webmaster tools accounts. It made me feel good, that because they are all designed ‘responsively’, they passed with flying colors.

An easy way to check it out yourself is to go to any smart phone and enter organic parameters for finding your website. In other words, use keywords, not the url, for finding your site on your phone. When it appears in the search screen, it will say Mobile-friendly in the prefix of the description, like I’ve shown below. That’s it… way easy. 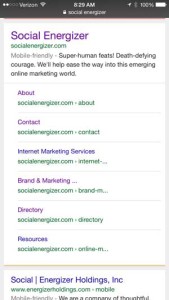 This is one more reason, why I say that WordPress websites work best for small business. The WordPress platform that structures your website is a continuously updating web platform. They saw the need to be mobile-friendly long ago, that trend started about the time the first smartphone sold.

As we track the mandates from Google and other dynamic variables (i.e. security) on a daily basis. You can rest easy knowing our proactive strategy positions your website for any upcoming trends. Keeping your web traffic safe and flourishing is important to us. Thank you for letting us serve you.

2. Blogging allows you to hone your rewriting skills with its many editing functions.

3. Blogs attract readers; and the more readers the bigger your audience.

5. Blogging connects you with other authors, readers, and book lovers.

6. A blog is a low cost way to market yourself as an author and promote your books.

7. A blog creates a community of readers who are invested in your publication success.

8. Writing blog posts is not enough. You need to read what others are writing too and make those connections to create an audience for your work.

9. A blog creates an electronic persona of you as a professional author and is the equivalent of the old fashioned calling card.

10. Your blog will help your writing get found online by readers, writers, editors, agents and publishers.

Before meeting with a new client, I often hear “this is like a date” from my team. How true… and obvious, actually. Creating a great sales relationship is much like dating. They both begin with uncertainty and require a mutual interest that may result in a leap of trust and, if successful, a closer relationship. So here’s the secret to matchmaking in sales.

See? Sales = dating. The difference is only what price is paid, when and by whom. For ideas on how you can start your online matchmaking between buyers and sellers give us a call. We’ll show you how to ease into new client relationships and enjoy good business.

Have you ever noticed how the commercials on television are louder than the programs? Do you have a used car salesman who screams on TV?

Very soon, you will begin hearing less of “turn that #@&! thing down!”  in living rooms across America. This week Congress will pass the Commercial Advertising Loudness Mitigation (CALM)  Act, that will set standards on broadcast volumes for commercial advertising. I join many Americans in saying that it comes none too soon.

“Your average human today is inundated with over 2000 outbound marketing interruptions per day and is figuring out more and more creative ways to block them out, including caller id, spam filtering, Tivo, and Sirius satellite radio,” according to Brian Halligan , Hubspot CEO and Founder when comparing Outbound vs Inbound Marketing.

Halligan says it is no longer necessary to attend expensive trade shows or travel to a vendor for a demonstration because more and more product research info is easily available online.

Hope you had a great Thanksgiving Day with friends and family. Keeping it on the lighter side today, as everyone runs out for Black Friday shopping or whatever you do on a ‘free’ day like this one.

Sometimes it’s nice to look behind what’s going on in our world, things we often take in without too much thought or analysis. One of those is the use of symbols. It ‘s a great story that our friends at Dark Roasted Blend wrote and is woven into everyone’s life, even the life of a Social Media maven.

Thank you for visiting my blog. I wish the best for you and yours. -Lynn

This week, I happened to find awesome places to keep your stuff –ala 2010. I don’t know if George would approve, it doesn’t seem “cluttery” enough for his approval, but these hyped-up USBs are very engaging.  How about a plate of Sushi to store your stuff? Oh you like it shiny? Then keep your stuff on a jeweled wristband. Or for those very practical individuals, try a swiss army knife that includes a USB blade. Surprisingly, these are all moderately priced, and I’m sure, just what you need as a place to keep all of your stuff.

I was doing some of my pre-Thanksgiving cleaning this weekend and realized that I routinely use what may be one of the most powerful, but underrated examples of Social Networking. It’s freecycle (www.freecycle.org), a social networking site that allows people to post their unwanted items and pick up needed things –all for free! The posting is free and the stuff is also free. It was established to keep stuff out of landfills.

Social networking, the backbone of Inbound Marketing, creates groups of like-minded people, now commonly called online communities, tribes and movements. Just looking at the effectiveness of freecycle.org illustrates how successful it can be.

Freecycle does more than just keeping stuff out of landfills. One of its strongest benefits may be an unknown and unplanned one: critical giving for those less wealthy, dare I say, poor. My husband and I found giving on freecycle.org is, well, priceless.

Why freecycle is priceless

A while back, we decided to buy two new mattresses. The old ones had to go and we posted them on freecycle.org.  A young couple called to pick up our son’s old mattress. When they arrived the young wife was verging on tears. She explained that their washer had broken on Monday, Tuesday the refrigerator broke, and that very morning, Thursday, her son had woken up and said “Mommy, my bed is biting me”. A spring had broken through the top and was literally sticking him.  After they left, my husband and I felt a warm feeling that we had not experienced in years.

The giving of the second mattress produced similar results. We posted it online and a lady called us saying that she would like to pick up the mattress for a friend. When she arrived, she told us that her friend was actually a young pregnant woman with a six-year old son. She was so happy to get the bed for them because they had been sleeping on the floor! The young mother was 6 months pregnant and the mattress was coming to her at a perfect time.

We learned that the reason mattresses are in such high demand is that places like St. Joes and Goodwill cannot take them due to health laws. Seems someone overlooked something with this law.

Anyway, we have found “just the right way” to get rid all of our unwanted “things” is on freecycle.org, a social networking site. They will allow pretty much anything to be given away -not just mattresses. Check freecycle.org out and make someone happy.

Here are some interesting facts about who is… and who isn’t using the Web. Do you think there is room to grow?

Saying “The world has changed” is a gross understatement. The momentum is building so quickly, there isn’t much you can do about it, right? What about evolutionizing your business, so that it doesn’t go the way of the dinosaur? Where do you begin? It begins with learning, in general, and, specifically, new technology, new media and embracing “all things Internet”.

Still skeptical? Check out this video from XPLANE | Visual thinking:

Scared? What do you think? Is it time to change how you are doing business?

The economy is getting better, really. When opportunity knocks, will you be ready? Do you know who you are? Er, I mean your company. In short, do you know your company brand’s personality? You live with it everyday, but sometimes we get so busy, we need to catch up with “who” it really is.

It’s kind of like the morning conversation with the husband (or wife) and the talk around the dinner table with the kids.  If the TV is off, you really get to know each other. If it’s on, then not-so-much. So turn off your TV and get to know your family. Then at work, turn off whatever is pulling your attention and get to know your company’s brand.

Well, who is it? It’s who you think it is AND its also who your customers think it is. It will be a blend of those two: 1) because it came from you, but 2) as others interact with your brand, it becomes theirs. Are you ready to let that happen? How do you get the remote control back once in a while?

Next question: Where are you going?